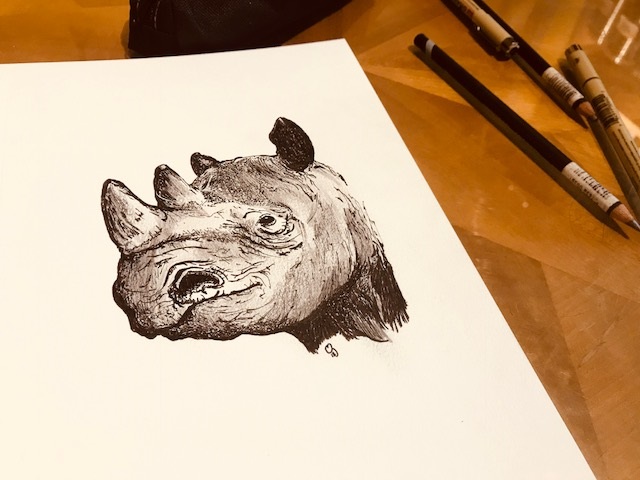 Come join us for an Artist Reception for the December featured artist: Chad Zingales.

"Chad Zingales ascended upon Hollis NH forty years ago.  His accomplishments have been widely heralded as “stunningly-ordinary” and “just slightly surpassing mediocrity”.

Chad doesn’t typically write (or speak) in the third person, but for the sake of this exercise, he will give it a whirl.

Zingaless’ artistic career began in the confines of a cozy room inside his childhood home, where he and his older brother would draw together while listening to Christopher Cross albums.  Chad took a hiatus from his art in junior high, when he faced disciplinary action from his art teachers, not because of his revolutionary-thinking, but more for his inability to act like a respectful human being.   That 'troubled' phase quickly ended with a tongue-lashing from his parents, copious amounts of yard work, and an eventual apology letter to the administration entitled, “A Clay Wheel is Not A Toy.”

Chad still resides in Hollis, and he is the loving father of two beautiful daughters.  In his spare time, he enjoys song-writing, Halloween, and performing stand up comedy.  He is 5'9" tall, and weighs approximately 165 lbs (give or take 20-30 lbs).  In a recent interview for Minum magazine, Chad was asked, “what is wrong with you?” to which he replied, “I'm B12 deficient and I have an astigmatism in my right eye”.

Light refreshments will be served with a healthy dose of humor!